The emergence of 5G and edge computing are causing operators to assess their network architecture. They are expanding business-to-business service offerings and seek to create future-oriented next-generation digital infrastructure. One area of interest that has arisen from this, is cloud-network convergence – whereby the cloud serves as a unified platform for operator B2B services. 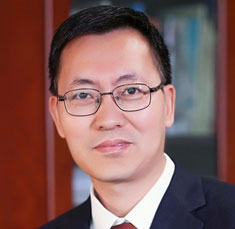 Referring to a white paper the operator released on the subject in 2015, Xiongyan noted that it had proposed “decoupled and intensive network architecture for cloud-based dual centers in the hope of building resilient ultra-broadband networks powered by SDN/NFV.

“This not only delivers cloud-network integration services but also creates an open ecosystem. In recent years, we’ve also been promoting SDN in building Intelligent Metro,” he said.

According to Xiongyan, the emergence of the industrial Internet and the development of AI is causing China Unicom to provide more intelligent and converged services for device computing, edge computing and cloud computing. “The computing resource is everywhere,” he said.

“5G, cloud and AI are three key technological elements of New Infrastructure. That’s why we’re focusing on these three as we move forward with infrastructure projects,” he said.

Describing ubiquitous computing as a ‘huge advantage’, Xiongyan told attendees at Mobile World Congress Shanghai that it aims to cut both latency and costs. “Lower latency means that users and applications can access relevant computing services close to them. Some applications can access computing services on the device or at the edge without going all the way to central cloud. This new trend can help us shorten the transmission distance and will eventually lower the transmission cost,” he said.Furthermore, the concept of allocating different computing resources to different applications can also increase the utilization of computing resources. “Compute First Networking has also become a new hotspot for developing ICT networks,” Xiongyan added.

He stressed the important role that operators have in providing diversified computing resources – both for the sake of their customers and for their own digital evolution. “They can provide users with application resources together with computing resources. This helps operators transform into emerging integrated information service providers,” he said.

Speaking to networks’ continued role as the underlying technology for computing services, Xiongyan urged their evolution, saying that it is important to empower networks to provide computing-aware scheduling and deterministic connections.

Looking ahead, Xiongyan said that China Unicom sees the next phases of cloud-network convergence as computing-networking integration. “Networks need to provide more intelligent services for efficient collaboration of cloud, edge, and device computing. In the past, we only tried to achieve higher bandwidth. Now our goal is to provide deterministic connections,” he added.

China Unicom is continuing to play an active role in advancing Computing First Network technology, including through the initiation of a CFN industry alliance late last year. Describing the operator’s plans for the rest of 2021, Xiongyan said it will introduce a series of network innovations to facilitate network development, through three pilot projects. “The first one is about CFNs achieving computing and networking integration. The second one is about deterministic networks to provide customized services with deterministic experience for vertical industry applications and video services. Third we will build an all-optical foundation to achieve cloud and optical integration,” he said.